The Real Meaning of To Infinity and Beyond!

Yes, I went there. I finally acknowledged the elephant in the room, and I am writing now about the most used and abused quote about infinity. 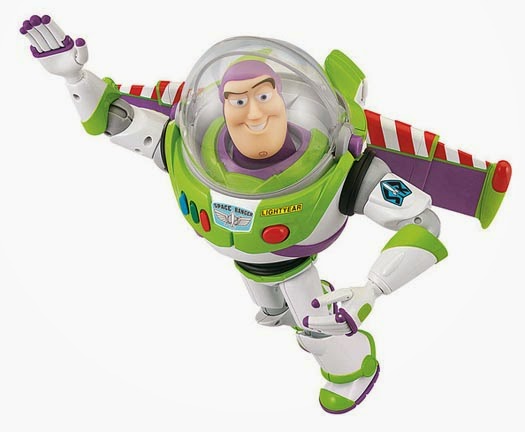 I'm talking of course about the infamous catchphrase of Buzz Lightyear in Toy Story or, as Imdb puts it:

[repeated line]
Buzz: To infinity, and beyond!

What is the meaning of "To infinity and beyond?"

It seems a throwaway line, but hidden there is a deep philosophical meaning. It pops up here and there in pop culture and even in random discussions with friends. In 2001: A Space Odissey just before the psychedelic "Star Gate" sequence a title card appear, "Jupiter and Beyond the Infinite" (an inspiration for Buzz?). In the hit Single Ladies (Put a Ring on It), Beyoncé sings "... and delivers me to a destiny, to infinity and beyond.", There are then the album Beyond the Infinite, by trance group Juno Reactor, or the Greek film Eternity and a Day, by director Theo Angelopoulos. In 2008 this sentence helped father and son to survive a shipwreck. And let's not forget infinity plus one! And the lovey-dovey couples smooching "I love you infinity times and more". There are probably infinite other examples (and more!).

It sounds paradoxical: how can you go beyond the infinity? It's not possible to reach the end of infinity (because it is infinite), so how can one overtake it? One needs to change completely point of view: from potential infinity to actual infinity.

If you have the mentality above, it will not: you have this infinite succession of states: 10 m distance, 1 m distance, 10 cm distance, ... and you cannot reach the end of it, because it is infinite! This is the so-called potential infinite, potential because you never realize it in full, you just see parts of it.

But we know that Achilles reaches the tortoise, right? We're not that stupid. So what? Well, this is where Cantor shines! He managed to treat in a formal way the actual infinite. You pick all the infinity, you put it in a sack, and you treat it as a whole, completed object. So you can imagine what happens after it, in this case Achilles overtake the tortoise, turns and makes very funny faces. "Brlbrblrblrl".

Think of the potential infinity as an infinity you are walking inside. Like, just go out now and try to reach the horizon, it will always go on and on and you will never reach it. But the actual infinity is like seeing everything from above, so instead of walking pick a drone and go up, up, up, and you can embrace everything with a single view. (Of course, the metaphor works only if our Earth is flat and infinite, sorry, so I guess that makes no sense).

Another Zeno's Paradox: the dichotomy paradox. You have to go to a bus station that is 1 km far. To go there, you have to go half kilometer far. And then a quarter kilometer more. And then an eighth more. How can you reach the bus station? In mathematics, the distance you make is written like this:

The potentialists say that this is just a trick, that our limited minds just cannot comprehend actual infinities, and yet, mathematics goes just smoother with them, and the paradoxes are solved. Thanks, Cantor!

You know what? Let me see what the Internet thinks that "To infinity and beyond" means...

Fun fact: there are many, many mathematicians, even big experts, even Fields medals, that just have no clue about this. They work in mathematics like they were in the 19th century, willfully ignoring that all their work is founded on this.

This is the first results in Google (hopefully the second after I post this).

Now, I don't know who are these guys. Most probably they are misquoted, maybe they don't exists, so I am not really against them. But what is written there, trying to sound professional as heck (Harvard! MIT! Bum!) is far-reaching or just nonsense. The first sentence, by Dt Sanjay Gupta, is a typical expression of potential infinity (it approaches a certain number but never actually reaches it) and does not explain anything. Where is the beyond? The second sentence makes more sense: here is a horizontal asymptotes:

The asymptote is that dashed line. See? The function crosses it. Here is a vertical asymptote:

The function doesn't cross the line. And Buzz can! Well, OK, but... isn't this a little bit too technical? Also, isn't it a bit underwhelming that "Infinity and beyond" means a little bump in a line, just like your body when you eat too much Marshmallow Fluff? 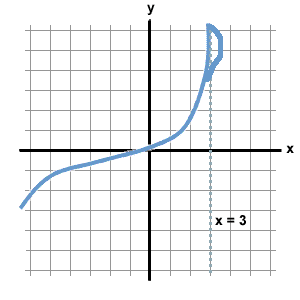 So, forget about what you read online. The meaning of "To infinity and beyond", even mathematically, is: we all think that we are trapped in our human limits, without escape, but in the end it is just an illusion. Buzz (and Cantor) is showing us the way to recognize the illusion, change the perspective, finally break free and go! leaving all our chains behind, going were it was previously unthinkable, unimaginable. 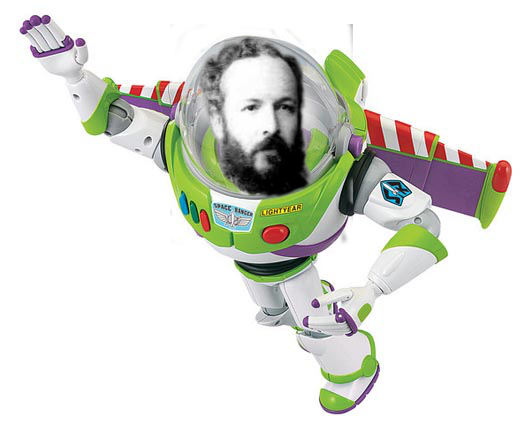 You hear that, potentialists?

PS. I am actually going to Harvard next week. If I meet Dr. Sanjay Gupta, I'll let you know.

Statistics says that probably this is the first page of the blog you are reading. Then, may I suggest to read the manifesto, to understand what is this about? Or just skip to the meaty parts, like the posts on "The Fault in Our Stars", or "The Big Bang Theory", or a cute AT&T advertisement.
Posted by Vincenzo Dimonte at 12:37 AM