God and the Big Bang Theory

The title caught your attention? Good! It would seem at the beginning that this has nothing to do with set theory, but trust me and go on.

This time I am going to talk about the Big Bang Theory. Yes, not the awe-inducing cosmological model for the early development of the universe, but the sitcom (notice the uppercase T?). What can I say about this sitcom that has never been said before? Extremely popular, it lures the nerds with tons of citations about science, science fiction and fantasy, but at the same time it ridiculizes them, but anyway less than other series in the past. The humour is predictable and comforting. Anyway, everybody agrees that, like all the TV series, with time it became less interesting, so I stopped seeing it.

Until this week! When this discussion on Mathematics Stack Exchange made me curious again, and I have seen the episode 8x02 "The Junior Professor Solution", aired the 22 September 2014. So, first of all, kudos to Doug Spoonwood for having spotted this, and to Asaf Karagila for being the first to realize its significance.  I cannot link the video, of course, so I'll describe the scene. Sheldon, the genius of the series, has to prepare a lesson for Wolowitz, and he wanted it to be as hard as possible. Sheldon is showing whiteboards full of difficult formulas, saying

Oh, I'm working on my lesson plan for Wolowitz. He is going to be so lost. Look at this section over here. 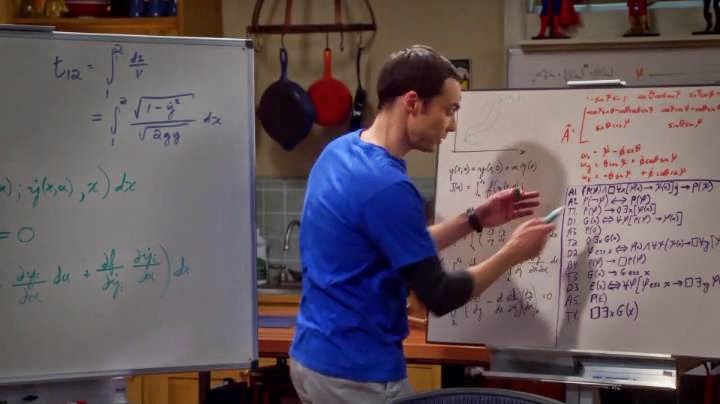 Even I don't really understand it. 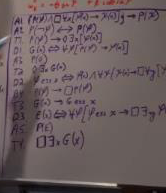 This is the famous proof by Gödel of the existence of God (better known as Gödel's ontological proof). Woah. I will leave you a moment to contemplate the magnificence of this discovery.

No, no, no, what are you thinking? Militant atheists, don't think that Gödel was a crackpot (well, he was, but after that). Dawkins, you got it wrong (not for the first time)! And militant religious, don't go around saying that the existence of God is logical (gah). Why do you always have to fight? He didn't really proved the existence of God, in reality. The right way to see it is as part of the history of philosophical logic.

It was pretty common in the old days to try to prove the existence of God via logical arguments. Think Anselm of Canterbury, Descartes, guys like that. Gödel found logical mistakes in those arguments, and just rewrote them in the current logic language, i.e. modal logic, which distinguishes between necessary truths (something that must be true, no matter what) and contingent truths (something that is true, but just because, if it weren't true everybody would be chill). Nothing really new, then, and nothing real. It is just syntax, empty words, he was interested in the reasoning, not in its connections with reality.

If this can be, then there exists an object with all the positive properties, i.e., God. That's it. All the details are in the Wikipedia link, it's pretty formal, but it is not difficult. He could have written "fairy" or "vegetable-y" instead of "positive", and "unicorn" or "carrot" instead of "God", and he would have proved the existence of a unicorn or of a carrot.

But look again at Sheldon's whiteboard! See, there are A1, A2 etc also there. I did it on purpose, what is written in the whiteboard correspond exactly to what I wrote here. Almost. There is a horrible mistake.

This is what Sheldon wrote, translated from formalese to English:

But Sheldon! What did you write?! How can this be? You really didn't understand the proof.

And what about Set Theory? This is where things got interesting. I told you that God exists if  there exist positive properties. Do they? Harvey Friedman has a manuscript on that, where he defines God and positive properties more carefully, and proves that they exist if... if... 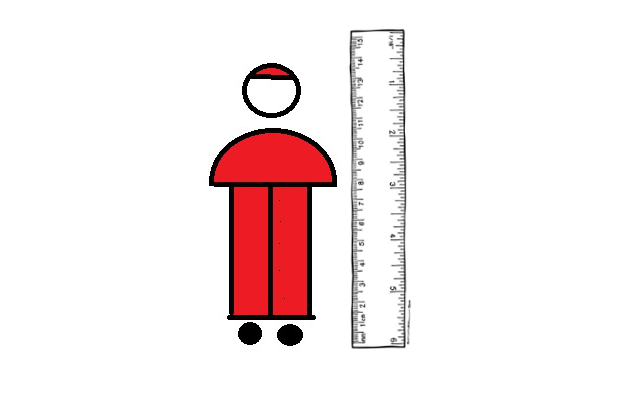 if there exists a measurable cardinal! Step aside, Pope. We did your job. Talking about solving unsolvable problems with large cardinals!

Update: it turns out that Gödel hit a wall here. In 2013 someone managed to prove (with Artificial Intelligence, nonetheless!) that the hypothesis A1-A5 are actually contradictory taken all together, so Gödel proof it's just wrong. Alas, all this post for nothing.

You want to build a measurable y yourself? Go here. You like to see discussions about infinity between theologians and set theorists? Then this page is just for you.

Posted by Vincenzo Dimonte at 7:17 AM