Ok, I am a standard mathematician. I don't want to reinforce the trite stereotype of the nerd math-lover, but I have thick glasses, often the colours of my clothes don't match (and my clothes are too big/too small/perfect just for old people), I learned how to bike waaay after learning the difference between mass and weight, and of course I am terrified, terrified by needlespleasepleasepleasetakeoutfrommyviewthatinstrumentofterror. I'm hopeless, you really wouldn't expect me to dissert about the current fashion in tattoos, would you?

Yet, Buzzfeed made a list of the most trendy tattoos of the year 2014. And what do we have here? 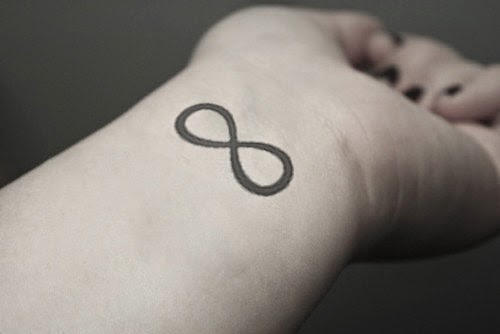 The lemniscate really exploded this year. Even someone like me had to notice this trend in the skin of the people around. The most popular is probably the one with "love" embedded in it, or other writings (note the Buzz Lightyear reminder!) 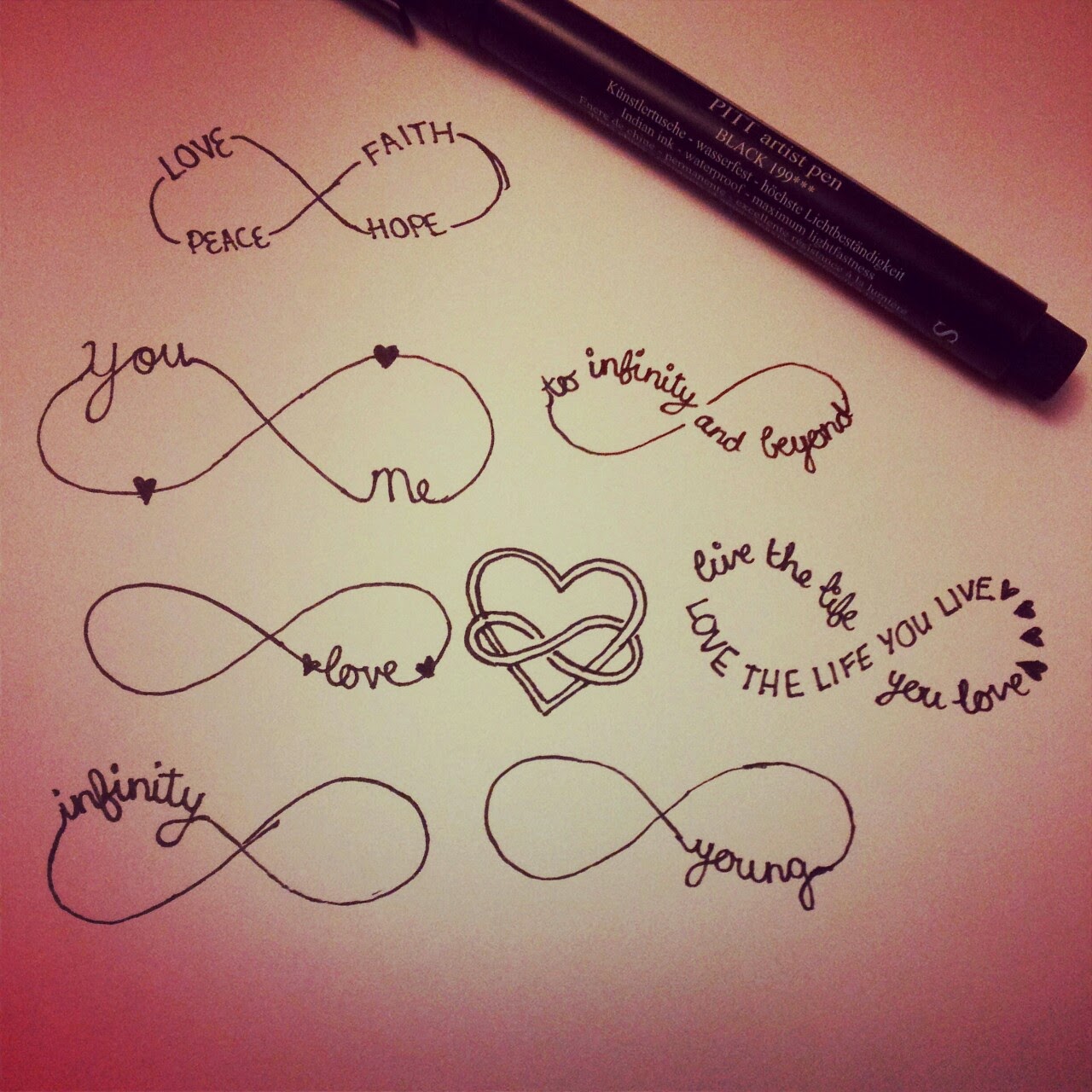 and the combos "feather+infinity" and "finger tattoo+infinity" are also ubiquitous. 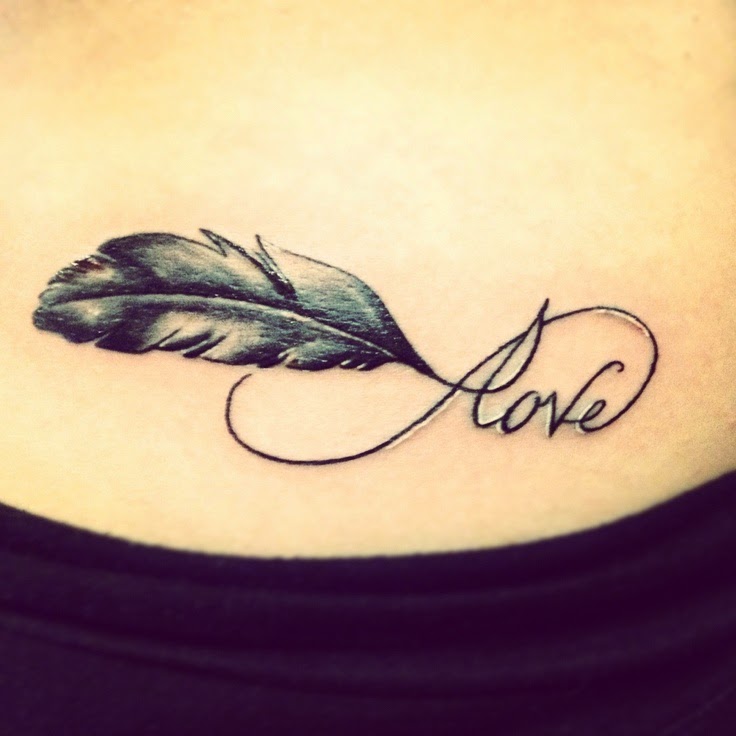 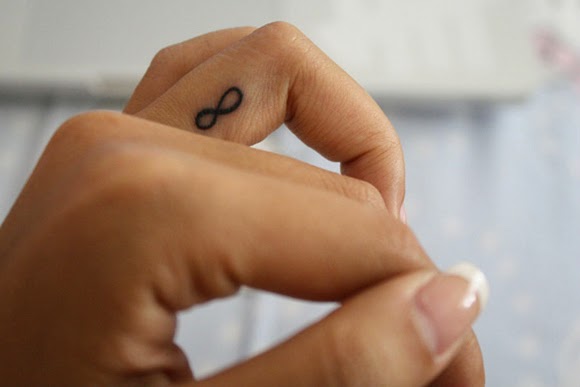 There are tumblrs devoted to it and all sorts of websites. But I am a set theorists, not a fashion designer, so what can I say to you about it?

Well, now I am about to dump to you a nugget of information that will surely make you popular with your friends. You can ask: why there is one symbol of infinity, when there are many infinities? The reason is that the lemniscate, in mathematics, always refers to the potential infinity, i.e., the infinity you cannot reach, (I explain this here) while each different actual infinity, i.e., an infinity considered as size of an infinite set, has a different symbol. Cool, huh?

Pick up artist suggestion
So, you are at a New Year party and you see a cute girl with an infinity tattoo. What do you do? You go close to her, you say "Hey, did you know that this symbol only means potential infinity? But the actual infinity..." Pause. "... is in my pants".

And then you pick from your pants' pocket a piece of paper with an aleph on it. Mark my words, she'll throw herself to your arms. You're welcome.

You want a symbol that it's even more than infinity? Here you are.
Posted by Vincenzo Dimonte at 2:07 AM No comments: 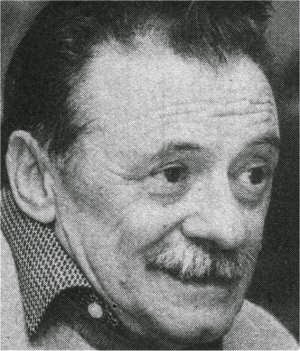 Christmas is back! The most... depressing period of the year. Really, while the peak of suicides over Christmas is a myth, it surely can bring the worst in our souls: extremely overcrowded shopping streets (with the included unnecessary touching, keep your heels far from my feet, woman, thanks), creepy Santa Claus(es?) grinning at every corner, sad, pale light decorations that always miss a row of burned bulbs and that in the most flamboyant cases will surely induce a seizure. And what about the perfect present you have to choose for your Nazi sympathizer cousin that you managed to avoid for one year?

For this reason, this time I'll try to avoid the hard mathematics and I'll post something... warmer. A poem, whose title is "Set Theory"

This is a poem by Mario Benedetti, a Uruguyan poet, probably one of the most important writers in Latin America in the last century, even if he is not really known in the English-speaking world.

Unfortunately, my knowledge of Spanish and English is not enough for a good translation, so if you don't know Spanish (hello, 93% of the world population!), I can just give you the meaning. In the end, it has nothing to do with maths: "conjunto" in English is "set", but also "collection", "whole". Benedetti says that every body has a harmony and a disharmony. somethimes the sum of harmonies can be almost loathsome, while in other cases the collection of disharmonies can produce something even better than beauty.

So, nothing to say about math here, the "set theory" of the title was just the inspiration for Benedetti to write a small and wise poem about the beauty of the imperfection of human nature. Keep it with you this days: what if the collection of all the horrors we will have to endure for the holidays, in the end really forms something beautiful?

Thanks to Luz for having pointed me out this poem! See? The suggestions box works!

Looking for something light? Then naive Set Theory is for you.
Posted by Vincenzo Dimonte at 6:20 AM No comments: