Encyclopedia Wand and the End of Enthropy

Actually, this post was meant to capitalize on the fleeting moment of fame my blog had, being linked in the description of the first video below. Of course, my pace is totally different from the rest of the web, so while the "moment" lasted one week, it took me one month to write this post, so long for timeliness. Well, it's a nice post anyway. Enjoy!

Hey, there. How're you doing? If you just stumbled here, statistically it means that you arrived from Vsauce video. Did you? If not, you should see it, it's pretty awesome. I'll wait. Yeah, yeah, don't worry, I'll wait, honest.

Anyway, if you are like me, now you'll have the following questions hovering inside your mind:

And here we are! Hard-Boiled Wonderland and the End of the World (Sekai no owari to Hādo-Boirudo Wandārando) is a 1985 novel by Haruki Murakami. It is about... you know unicorns, right? In the brain... and then there is the Town, like... the cyphering of minds, with minds... and yet the shadow... Listen, there are libraries, music and a bit of sex, so it's a Murakami book. Read it, it's fun!

Anyway, at a certain point the "encyclopedia wand" is introduced:

"The encyclopedia wand's a theoretical puzzle, like Zeno's paradox. The idea is t'engrave the entire encyclopedia onto a single toothpick. Know how you do it?"
"You tell me."
"You take your information, your encyclopedia text, and you transpose it into numerics. You assign everything a two-digit number, periods and commas included. 00 is a blank, A is 01, B is 02 and so on. Then after you've lined them all up, you put a decimal point before the whole lot. So now you've got a very long sub-decimal fraction, 0.173000631... Next, you engrave a mark at exactly that point along the toothpick, then 0.3333's got t'be a third of the way from the tip. You follow?"
"Sure."

Zeno's paradox! You have my attention, Mr. Murakami. But this has nothing to do with Zeno's paradox for now. In fact, everything is finite. The encyclopedia text is finite, in the end you have a number with many many digit, but it's finite. And please please please don't be mad at me but 0.3333 is not one third, 0.3333..., with infinite decimal digits, is. 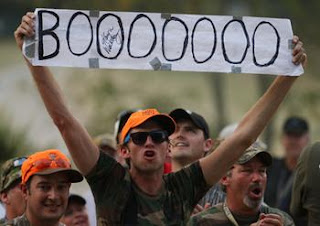 Well, but that's really a cool thought experiment. You pick a toothpick, and with only one sign you have written an entire encyclopedia. Let's continue our reading:

"That's how you can fit data of any length in a single point on a toothpick. Only theoretically, of course. No existin' technology can actually engrave so fine a point. [...] Make the fraction as long as you want. It'll be finite, but pretty near eternal. Though if you make it a repeatin' decimal, why, then it is eternal."

So Murakami agrees with me that that was finite. The infinite part, now, is... disappointing. That's all? First of all, why limiting yourself to the repeatin' decimal? (I'd like to know the original, here, though, to see if there is something lost in translation.) A repeatin' decimal is a number whose digits (wait for it...) repeat themselves, over and over, to infinity. But there are all sorts of numbers with non repeatin' decimals, like pi or e, A repeatin' decimal (why am I writing like this?) actually does not have much information, it can be coded in a finite way (for example you can engrave in black when the decimal is finite, in red when it is repeatin', so 0.3333... is just 0.3 in red). To go really eternal you need to go irrational. 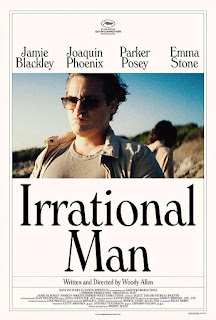 NO! I don't mean that! (One day I'll regret using all the image space of the blog for dumb jokes). Let me recap quickly, for those that were a bit sleepy in math class (we all went through that):

Irrational numbers, as they cannot be written in fractions, have all sorts of fun properties. For example, pick a circle: 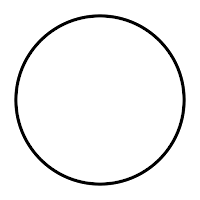 Suppose the circumference is 1m, Now pick your favorite irrational number, say square root of 2 (it works with any). Start from a point, and walk square root metres on the circle. You'll stop around here: 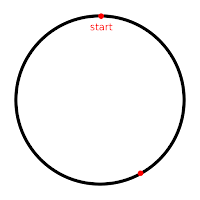 All your stops are going to be uniformally distributed, i.e., they are going to cover pretty much all the circle in a uniform way, without areas that are more dense or less dense. This is called the equidistribution theorem. It's a special case of the ergodic theorem, the key theorem for ergodic theory. What is ergodic theory, you say? A picture is worth many words: 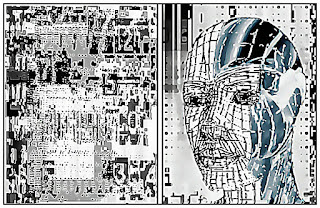 OK, sorry, I have no idea too. This is one of the results
in a Google Image search

Let's go back to our encyclopedia wand now. We wrote an entire encyclopedia with one carving. Let's do now the opposite: we take the toothpick, we make one carving, and we ask: what did we write? Well, if we are doing it with an irrational number, prepare to be surprised! The same ergodic theorem above says that we have, with probability 1 (so not full certainty, but pretty much), everything. Everything.

The full encyclopedia? It's there. Maybe not beginning at the first digit, or the 10th, or the 345891st, but it's there somewhere. If you are in a hurry, there is even the short version. The Bible? Check. The Lord of the Rings? It's there, with the Hobbit, the Silmarillion and all. The last Dan Brown? Also there, with all its 44 translations. Even with translations that were never published, like in Tinigua and Mullukmulluk.

You know your favorite slash fiction between Severus Snape and the Teletubbies? Yep, still there. But wait! Then... also that fantastic book you had in mind for so long and never bothered to write it's... there? Even if it was never written? And also the story of your life, in all the details? The story of your future life, already written there, in that single irrational number, like you cannot even change it? I know what you're thinking, because there I can find the same exact thoughts you are having right now while you are reading this...

Whoa whoa, there, let's stop the trip here. Better not to go into that rabbit hole. But yet, so much power in one tiny little number!

There is something that it's bothering me, though, in Murakami's book. This phrase:

Only theoretically, of course. No existin' technology can actually engrave so fine a point.

Why so cautious, Murakami? Why chickenin' out like that? You wrote about super-tall frogs that want to destroy Tokyo while sipping tea, cat killer whiskey icons, parallel words populated by unicorns, men that speak in tattoo, and this is where you draw the line? This is what you consider too irrealistic, too bizarre, too-much-out-there? Engraving a fine point?

If that's the case, then, pardon me. I'm going to make a flute out of cats' souls.

Thanks to Prof. Fuchino for having pointed this to me.

Posted by Vincenzo Dimonte at 11:00 PM